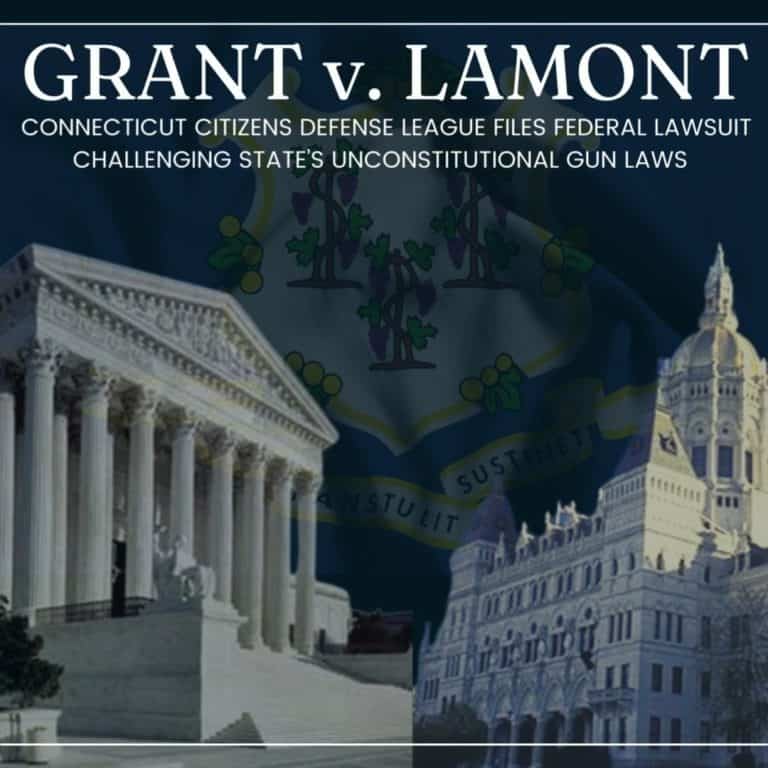 SEYMOUR, CT - The Connecticut Citizens Defense League (“CCDL”) announced today that it has filed a federal civil rights action in the United States District Court against various Connecticut officials, seeking to overturn Connecticut’s ban on the acquisition and possession of common modern sporting arms. The lawsuit argues that the ban violates the Second and Fourteen Amendments of the U.S. Constitution.

The CCDL is proud to partner in this lawsuit with the Second Amendment Foundation (“SAF”). In addition to the representative groups, three individual plaintiffs have stepped up to assert their constitutional rights: Jenny Hamilton, a mom, business owner and victim of domestic violence, as well as Eddie Grant and Michael Stiefel, former corrections officers who each served our state for over twenty years. All three individual plaintiffs would like to possess modern sporting rifles for defensive purposes, but are prevented from doing so by Connecticut’s unconstitutional and misnamed “assault weapon” ban.

“These individual plaintiffs are just a fraction of the tens of thousands of law-abiding gun owners who are members of the CCDL, and who have been aggrieved by Connecticut’s unconstitutional law since the ban was enacted,” said Holly Sullivan, President of the CCDL. “We all deserve to live in safe communities, but denying ownership of the most commonly owned firearms in the country is not the way to achieve it. The recent U.S. Supreme Court decision in Bruen has opened the door to this challenge, and we believe Connecticut will be hard pressed to prove its statutes are constitutional. Like those defending the New York statute stricken down in Bruen, anti-gun officials here in Connecticut trumpet their laws as being the harshest in the country. Quite clearly, the recent Supreme Court decision meets Connecticut’s harshness with rebuke in support of individual and inalienable rights. We bring this lawsuit to vindicate those rights.”

Connecticut Citizens Defense League, Inc. is a non-profit, non-partisan, grassroots organization of more than 43,000 members, committed to protecting the inalienable constitutional right of all citizens to keep and bear arms through legislative and grassroots advocacy, education, research, publishing, legal action and programs. The Second Amendment Foundation, Inc. is national organization comprised of more than 700,000 members. For nearly 50 years, the SAF has been a pioneer in innovative defense of the right to keep and bear arms, through its publications, public education and legal action.